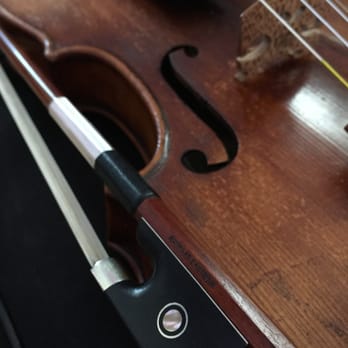 Last night I had a dream where I have gone to see a concert.  The concert is terrible.  The musicians don’t play very well.  There are two violinist I know.  I also play the violin.  One of the guys in showing me his violin and bow.  The bow looks more like a base bow.  I compare it to mine.  Mine also looks like a base bow.  I think that can’t be right.  I assume that is the way they are constructed here in the dream.  I’m now lucid.  He then shows me his tuning mechanism which is an old old television set from the 60’s.  He shows me all the different ways the television set offers for tuning his violin.  That seems so old to me as I mentally compare it to the app I use to tune my violin with on my cell phone.  I look down at my tuner and it too is an old television set from the 60’s.  Except mine is on a television stand much like the stand my mom had for her television.  What is going on here I think to myself.  This dream is way off base.  He then shows me the bridge on his violin which is metallic instead of wooden.  I attempt to play his violin but the strings are much closer together than mine.  Plus I now notice his base bow only has one hair left.  How are am I supposed to play it with one hair?  He tells me oh no that it plays perfectly well with just one hair.  He then leaves with his violin but forgets to take his base bow.  I think I”ll just put it in my violin case and when I see him again I’ll return his bow.  When I look inside my violin case it too has a bow that is a base bow.  Now I’m worried I won’t be able to tell them apart.  I want my bow because I know my bow is a pernambuco bow which is of superior quality.  Looking at my bow it has a full stands of hair on the bow yet they look very much alike.